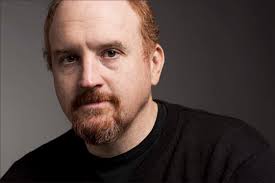 Everything’s amazing right now and nobody is happy. In my life-time the changes in the world have been incredible. When I was a kid we had a rotary phone. We had a phone that you had to stand next to. And you had to dial it. Do you realize how primitive (that is) – you are making sparks in a phone. And you actually hated people with zeroes in their numbers.

If you wanted money you had to go in the bank; which opened for 3 hours. Stay in line, [write a cheque] like an idiot and then when you ran out of money, you just go”Uh, well..I can’t do any more things now.” And even if you had a credit card – the guy would go “Uh”. He would bring out this whole [lugs a big machine]….And he would be like…he would call the president.

We now live in an amazing amazing world and its wasted on the crappiest generations of just spoiled  idiots who don’t care. Because this is what they are like – They have got their phone…”Uh…It won’t…” Give it a second! Its going to space. Will you give it a second to get back from space?

I was on an airplane and there was internet – high speed internet – on the airplane. That is the  newest thing that I know exists. And I am sitting on the airplane and they go, “Open up your  laptop; you can go on the internet.” It is fast and I am watching YouTube clips. I mean I am in the airplane! And then it breaks down. And they apologize, “The internet is not working.” And the guy next to me goes, “$%^%…This is ^&*%&”  Like how quickly the world owes him something he knew existed only ten seconds ago.

Flying is the worst one. Because people come back from flights and they tell you their story. And it’s like a horror story. They act as if their flight was like a cattle-car in the [unclear] That’s how bad they make it sound. Like – “It was the worst day of my life! First, we didn’t board for 20 minutes. And then we get on the plane and then we sit there! On the runway for 14 minutes. We had to sit there!”

Oh, really? What happened next? Did you fly through the air? Incredibly – like a bird? Did you partake in the miracle of human flight? You non-contributing zero? You are flying! It’s amazing. Everybody on every plane should just constantly go, “Oh my god! Wow!” You are flying! You are sitting in a chair in the sky! [Instead they go] “Hey, this doesn’t go back a lot..this chair is really…”

People say there are delays in flight. Delays really? New York to California in five hours! They used to take 30 years. [You could] die on the way there, have babies – there would be a whole group of people by the time you got there. Now, you watch a movie and you take a dump – and you are home.